I am a freelance journalist and author of five non-fiction books on medical and social history. My first book, The Knife Man, is a biography of the 18th-century surgeon John Hunter. My second, Wedlock, tells the story of Mary Eleanor Bowes, a rich heiress tricked into marriage by a fortune-hunter. It was a Channel 4 TV Book Club choice and no 1 in the Sunday Times bestseller list. My third book, How to Create the Perfect Wife, is the story of Thomas Day, a philanthropist who trained two foundlings in a bid to create his perfect wife. My fourth, The Mesmerist, is the tale of the doctor who introduced hypnotism to Victorian London. My new book, published in April 2020 in the UK and US, is about Endell Street Military Hospital which was run and staffed by women in London in the First World War. 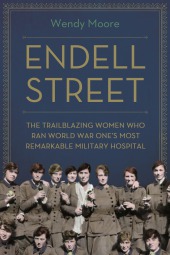 My latest book tells the story of the suffragette doctors, Louisa Garrett Anderson and Flora Murray, who ran Endell Street Military Hospital in the heart of London in World War One. Endell Street was the only hospital within the British Army to be staffed by women - all the doctors, nurses and orderlies were female except for a handful of male helpers. The women of Endell Street treated 26,000 wounded shipped back from the frontline in France, Gallipoli and elsewhere. After the war the hospital stayed open to treat victims of the Spanish flu. But when peace came everything changed.

BBC Radio 4 Book of the Week  UK paperback out now!

Watch the interview with me by Dr Dave Schneider 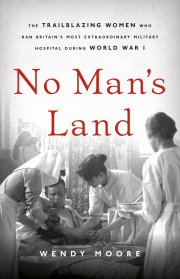 "Meticulously researched, written with élan and wit, Moore’s account comes at just the right time… “No Man’s Land” reminds us that people can rise to an occasion, that the biggest advances — for medicine, for humanity — can come during the toughest times, as a result of the toughest times. It reminds us that great courage and great ingenuity are possible even when the world feels very dark.” - Sarah Lyall in the New York Times

"This is the best book I've read about the First World War since Vera Brittain's Testament of Youth. ...this fascinating book is a microcosm of early 20th-century Britain at its very best - and its very worst." - Ysenda Maxtone Graham in The Times

“An absorbing and powerful narrative … Ms. Moore has an eye for detail that brings her story to life.” - Melanie Kirkpatrick in the Wall Street Journal

"This unmisssable, thrilling read ... Rarely is a book so important, so timely... vividly and meticulously written, Endell Street is a masterpiece to stretcher straight into a major film studio." - Philippa Stockley in the London Evening Standard

"One hundred years on, this compelling book at last gives Endell Street its due... Wendy Moore vividly depicts the convoys of seriously wounded soldiers arriving straight from the battlefields in France ... Moore is superb at describing the medical advances ..." - Ann Kennedy Smith in The Guardian

"...riveting... Moore has scoured archives and diaries to produce a meticulously researched history of this extraordinary institution.... By writing this splendid book, Moore has ensured that the efforts of these pioneering women will never be forgotten.' - Patricia Fara in the Literary Review

"This is history worth knowing and a book worth reading; it is a story of the triumph of the human spirit." - New York Journal of Books

Top 10 books about nursing - Katharine McMahon in the Guardian

"An absorbing history of courage and carnage." - Kirkus. 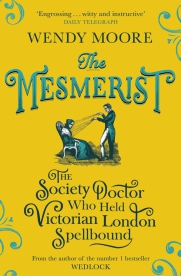 The Mesmerist - in paperback

The Mesmerist tells the story of John Elliotson, a revered doctor and teacher who introduced mesmerism - hypnotism - to Victorian Britain. Elliotson's demonstrations of patients being mesmerised at University College Hospital, London, drew huge crowds. Spectators were entranced by the Okey sisters, aged 15 and 17, who performed astonishing acts while mesmerised. When Elliotson's colleagues began to ask questions about the girls' veracity his brilliant career was in jeopardy.

Buy The Mesmerist at Amazon or Waterstones

Reviews of The Mesmerist

Spectator 'Wendy Moore is an expert guide to the world of early 19th-century medicine, and this fascinating book is packed with buccaneering, larger-than-life doctors and gruesome operations'.

The Lancet - How hypnosis split the Victorian medical profession

Read all the reviews Full details of all my talks here

Read an excerpt from The Mesmerist

Writers who inspire me - listen to my audio piece

Buy my books on Amazon